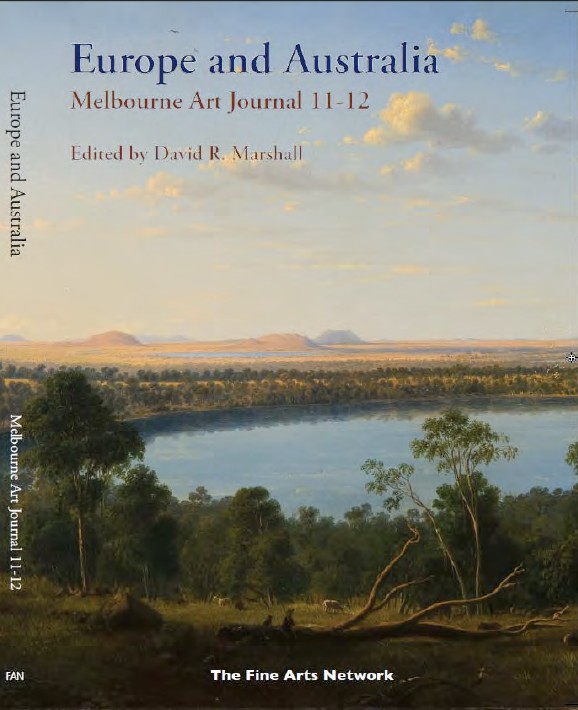 Chapter 2: Ruth Pullin – The Vulkaneifel and Victoria’s Western District: Eugen von Guérard and the Geognostic Landscape
When Eugene von Guérard first travelled through Victoria’s Western District in the mid 1850s he was struck by the volcanic character of the landscape. Sketches of its crater lakes and volcanic cones fill page after page of his sketchbooks. Just over a decade earlier, as a student at the Düsseldorf Academy, he had followed the lead of J.W. Schirmer and C.F. Lessing and had gone on an extended sketching expedition into the volcanic Eifel region of Germany. The artists’ interest in the Eifel was fuelled by scientific research, the ideas of Alexander von Humboldt and Carl Gustav Carus. It is argued here that von Guerard’s recognition of the geological significance of the volcanic landscape in the southern hemisphere, his ability to portray it with scientific accuracy and to convey its larger ‘geognostic’ meaning, was directly related to his knowledge of the scientifically and artistically significant Eifel region in the northern hemisphere.

Chapter 3: Caroline Jordan and Veronica Filmer – ‘Old Sayer’s Picture Gallery’: James Whitley Sayer, Founder of the Geelong Gallery
This article positions James Whitley Sayer, banker and amateur painter, as a key figure within the foundational history of the Geelong Gallery and, more broadly, the history of the Australian provincial gallery movement originating in Victoria in the 1880s. Sayer’s protracted struggle to realise an art gallery in Geelong is compared here with the circumstances that faced the citizen-founders of the other late nineteenth-century Victorian regional galleries, especially the Art Gallery of Ballarat, the most emulated of them. It argues for the crucial role played by prominent and public-spirited local individuals with a passionate interest in the arts, like Sayer, in bringing about these institutions, and concludes that the most significant factor in the delayed appearance of Geelong’s gallery was not a comparative deficiency of effort or enthusiasm on Sayer’s part, but something beyond his control: the depression of the 1890s.

Chapter 4: Mark Stocker – ‘Director of the Canoe’: The Auckland Statue of Sir George Grey
This article examines the public memorial which commemorates the colonial governor and politician Sir George Grey (1812–98). Sculpted in England by Francis John Williamson, a competent practitioner of Victorian realist portraiture, it was unveiled in Auckland in 1904. At the time, Grey’s championship of the Maori was stressed and his role as the metaphorical ‘Director of the Canoe’ was celebrated in the Maori language inscription on the pedestal. In addition, the statue is supported by a post rendered with somewhat inaccurately detailed ornamentation which was inspired by Maori wood-carving traditions. In 1987 the statue was discovered decapitated and a shadowy Maori political activist group, Upokokohua, subsequently claimed responsibility. Upokokohua’s motives, Grey’s changing status, and the critical reception of the statue’s replacement head are also examined.

Chapter 5: Katti Williams – Sublime Ruins: William Lucas’ Project for the Australian WWI War Memorial at Villers-Bretonneux, France
William Lucas’ largely unstudied design for the Australian Memorial at Villers-Bretonneux, France, won an internationally advertised competition in 1927, yet was never erected. Maligned in its day, Lucas’ design is notable for its juxtaposition of classical Doric columns alongside stark, streamlined masses. This article conducts a detailed architectural analysis of the design, addresses the available visual documentation and examines Lucas’ sources of inspiration. Lucas’ employment of columns was influenced by his exposure to the works of Sir Herbert Baker in South Africa, and his own trip to the Mediterranean in 1908. Standing in relative isolation, the monument’s columns were also evocative of ancient ruins, in which Lucas saw Sublime possibilities. The stark masses buttressing the columns were intended to inspire appropriate sentiments of awe in the viewer, through aesthetic principles described in John Ruskin’s Seven Lamps of Architecture.

Chapter 6: David Maskill – Imperial Lines: Harold Wright (1885–1961): Printmaking and Collecting at the End of Empire
Harold Wright (1885–1961) was the founder of a scholarship to study the print collection of the British Museum, which was the extension of a process of education and acquisition that he conducted throughout his life as the major advisor to private print collectors and public institutions in Australia and New Zealand. At Colnaghi’s, the Bond Street dealers he served for over fifty years, Wright presided over the last flourish of the so-called Etching Revival, tirelessly promoting the work of its key members until the Great Depression made them unmarketable and deeply unfashionable. He believed, as they did, that these British printmakers were the true heirs of the great tradition of European printmaking. While this view is at odds with the prevailing canon of modern printmaking, it offers us an alternative history, one which has directly informed the early print collecting of some of our major institutions.

Chapter 7: Simon Pierse – Sir Kenneth Clark: Deus Ex Machina of Australian Art
Baron Clark of Saltwood is generally accredited with bringing the work of Sidney Nolan before the British public and helping to establish his career in London. In his autobiography, Clark describes his surprise ‘discovery’ of the work of Nolan but makes no mention of the role that Professor Joseph Burke played in directing his attention towards the work of Nolan and Drysdale even before his first visit to Australia in 1949. Clark was impressed by the ‘queerness’ of Australian landscape art, although Drysdale’s paintings, influenced by the work of Sutherland and Moore, reflected recent trends in British art and Clark’s own artistic tastes. To Clark, Nolan’s landscapes seemed to offer a new future for contemporary landscape painting and coincided with ideas contained in Landscape into Art, part-written on the voyage to Australia. Nolan was influenced by Landscape into Art and reading it helped him respond in a new way to the central Australian landscape in an innovative series of paintings, produced shortly before his departure for England in 1950.

Chapter 8: Richard Read – Intra-Extra-Recto-Verso: Reversed Paintings and Ontological Realms
This article investigates the assumption that paintings that depict other paintings seen from behind, in examples ranging from fifteenth-century depictions of St Luke Painting the Virgin to Roy Lichtenstein’s Stretcher-Back series in the 1960s, constitute an emphatic kind of ‘presence by occlusion’ arising from their four relationships with pictorial settings: ‘intra’, ‘extra’, ‘recto’, ‘verso’. This permits the comparative analysis of the pictorial worlds or ontological realms in which they feature, together with the further possibility of representing the divided presence of more than one ontological realm encapsulated in a painting.

Chapter 9: Alex Baker – It’s All About You: Generosity in the Art of Harrell Fletcher
The artist Harrell Fletcher (based in Portland, Oregon, U.S.), in a practice spanning over a decade, makes few sellable objects, shuns the well-heeled collector circuit, and eschews the cult of personality. He directs the spotlight away from himself by shifting attention to the aspirations and talents of others. From siting a temporary museum focusing on local peoples’ lives in a northern California shopping mall, through working with an eight-year-old boy as the principal decision-maker for a work of public art created for a park in France, to his collaborative web-based project with artist Miranda July, Learning to Love You More, in which people are assigned various tasks for which the results are posted on the site regardless of the participant’s standing as artists, Fletcher’s art is really ‘all about you’, rather than all about him.