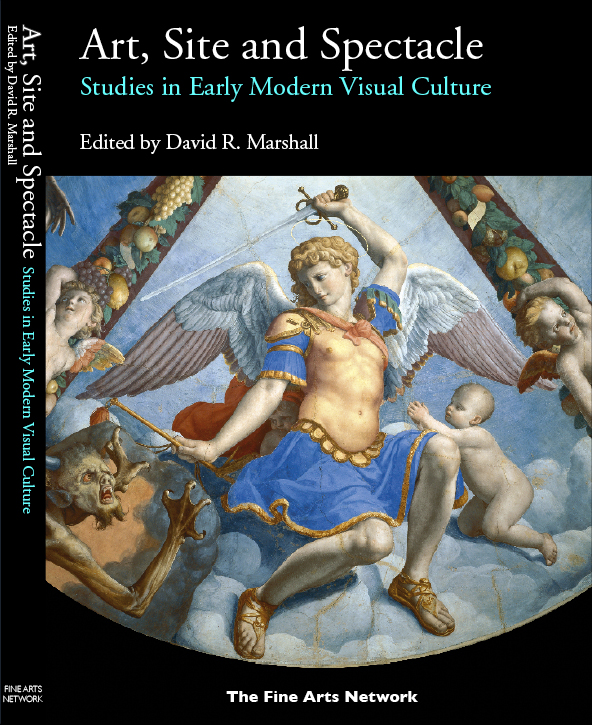 Chapter 2: Robert W. Gaston – Introduction: Some Meditations on Space and Place in Recent Florentine Art History
The tensions existing between current research methodologies and the evidence from the past they seek to utilise is highlighted in the case of research into the multiple roles attributed to the phenomenon of space in early modern Europe. It is argued that while we ought to pay close attention to research paradigms arising in visual culture theory and related disciplines, we should nevertheless be committed to adjusting (or abandoning) a given paradigm when we find counter-evidence emerging in the research process. The neglected significance of ‘place’ in a contemporary research culture obsessed with ‘space’ is discussed here in the context of how Florentine Renaissance churches were theorised by their users.

Chapter 3: Hugh Hudson – Paolo Uccello and Fra Angelico in the Early Quattrocento
This article examines the still little-understood nature of the early career of Paolo Uccello (1397–1475), proposing that a common characteristic of the earliest paintings now securely attributed to him—as well as a few earlier, more tentatively attributed ones—is their stylistic proximity to the paintings of Fra Angelico (c. 1395–1455). In particular, two quatrefoil panels of the Annunciation from the early quattrocento that have been attributed to Angelico exhibit distinctive characteristics in their execution also found in a number of Uccello’s paintings, confirming that Uccello was very familiar with Angelico’s early work. The suggestion is also advanced tentatively that they might indeed have collaborated on these works as young artists.

Chapter 4: Piers Baker-Bates – Sebastiano del Piombo’s Úbeda Pietà: Between Italy and Spain
This article explores the circumstances surrounding the commissioning of the Pietà requested in 1533 from Sebastiano del Piombo (1485–1547) by Ferrante Gonzaga (1507–1557) and intended as a gift for Francisco de los Cobos (1477–1547), Secretary of State to the Emperor Charles V. The investigation begins with the process of the commission before exploring ways in which the Pietà mirrors the career of Sebastiano at Rome. It examines the intended location of the work and the ‘Spanishness’ of the painting and how this throws new light on Sebastiano’s later work.

Chapter 5: Karin Wolfe – Francesco Trevisani and Landscape: Joseph Sold into Slavery in the National Gallery of Victoria
Joseph Sold into Slavery in the National Gallery of Victoria in Melbourne by Francesco Trevisani (1656–1746) is noteworthy for its extensive and beautifully rendered landscape. Trevisani is known primarily as a painter of religious and historical subjects and as a portraitist. His origins as a Venetian-trained artist specialising in genre painting, including landscape, have all but been forgotten. New archival research into the painter’s personal and professional life prompts a re-examination of the circumstances surrounding the commission for the Melbourne painting and its dating, as well as a reconsideration of his early career in Rome and his strained relationship with the official artists’ academy, the Accademia di S. Luca.

Chapter 6: Robert W. Gaston – Untangling the Mannerist Narrative: Bronzino, Moses, and Eleonora of Toledo in the Palazzo de’Signori, Florence
The chapel decorated for the use of Duchess Eleonora of Toledo (1522–1622) by Agnolo Bronzino (1503–1572) in the Palazzo de’Signori, Florence (1541–1545), has been much studied from the viewpoints of connoisseurship, formal structure and Medicean iconography. This article explores how the young Spaniard Eleonora would have used her chapel and its narratives of the story of Moses for specific private devotions arising from the religious practices she acquired from both sides of her family. It is argued that such ‘Mannerist’ pictorial narratives were not necessarily resistant to their patron’s comprehension or to modern interpretation, as has been alleged by some formalist historians of Mannerism.

Chapter 7: Christina Strunck – ‘The Marvel Not Only of Rome, But of All Italy’: The Galleria Colonna, Its Design History and Pictorial Programme 1661–1700
Due to the inaccessibility of the Colonna family archive, the complex mechanisms leading to the creation of the Galleria Colonna, Rome’s most splendid gallery building, have remained in the dark for centuries. Recently discovered documents necessitate a complete revision of our understanding of the design process. The involvement of artists not hitherto associated with the project—such as Mattia de’Rossi (1637–1695), Carlo Fontana (1638–1714) and Luca Giordano (1634–1705)—can now be documented. Chief among these was Gianlorenzo Bernini (1598–1680), who created his ‘unknown masterpiece’ in the Galleria Colonna. The present article reconstructs the history of the gallery’s design and seeks to elucidate the aesthetic, political and social factors that contributed to the process of shaping its architectural form and pictorial programme.

Chapter 8: Arnold Witte – Hermits in High Society: Private Retreats in Late Seicento Rome
This article traces the beginnings in the seventeenth century of a well-known eighteenth-century phenomenon: the garden hermitage. Members of the ruling families of the city of Rome disposed of so-called romitorii in their private apartments. Most of these were designed and executed by Johann Paul Schor (1615–1674), decorator and assistant to Gianlorenzo Bernini (1598–1680). After a discussion of the appearance of these retreats and their occupants, it will be argued that they reflected certain changes in Roman society. These occurred under the influence of foreign, especially French, etiquette, which was much less restrictive for women than was Roman etiquette, and called for sociable meetings outside of courtly restraints. These changes were introduced by the rebellious but influential Maria Mancini (1640–1706) after her marriage to the Contestabile Lorenzo Onofrio Colonna (1637–1689), and eagerly taken up by other, even male, members of the Roman nobility.

Chapter 9: David R. Marshall – Giovanni Paolo Panini as Architectural Critic: The Competition for the Facade of S. Giovanni in Laterano in 1732 and the Quirinal Caffeaus
By the nature of his profession as a painter of capricci and vedute, Giovanni Paolo Panini (1692–1765), had to be well acquainted with issues of architectural style and theory. In 1732 he was one of the judges of a competition to choose the architect of the new façade of S. Giovanni in Laterano under the Florentine Pope Clement XII Corsini (reigned 1730–1740). By examining his critiques of the various models and drawings submitted to the Lateran competition, this article attempts to establish where Panini stood in relation to the architectural design issues of his day, in particular the conflict between an established tradition derived from the unexecuted designs of Francesco Borromini (1599–1667) for the façade and the radical conception of the winner of the competition, the Florentine architect Alessandro Galilei (1691–1736). It also argues that a painting in which Panini makes significant changes to the design of the Quirinal Caffeaus by Ferdinando Fuga (1699–1782) was a considered correction of what Panini considered to be deficiencies in Fuga’s style.

Chapter 10: Lisa Beaven – Claude Lorrain’s Harbour Scenes: Sun, Science and the Theatre in the Barberini Years
The majority of the Seaports of Claude Lorrain (1604/5–1682) were painted between 1630 and 1648, during the papacy of Urban VIII Barberini (reigned 1623–1644). It is argued here that the immediate inspiration for these paintings lay in the contemporary cultural and scientific context of the Barberini court, in particular religious and secular theatre sets with their use of hidden lighting. Furthermore, as a symbol, the sun rising or falling on the sea was highly charged in a period when Galileo Galilei (1564–1642) was brought before the Inquisition for arguing the earth revolved around the sun while for the Pope it also had great personal significance.

Chapter 11: Katrina Grant – Teatri di Verzura: Hedge Theatres in Baroque Lucca
This article examines the origins of the teatri di verzura or hedge theatres, the earliest examples of which appear in the gardens of Lucca. The exact reason for their construction is uncertain, and only the scantiest of records exist to suggest how they were used. However, an examination of the wider cultural life of Lucca itself suggests that these theatres were some of the earliest to be built for use as performance spaces for literary academies, pre-dating the more famous spaces of the Arcadian academy in Rome by several decades.

Chapter 12: Mark D. Shepheard – ‘Will the Real Boccherini Please Stand Up’: New Light on an Eighteenth-Century Portrait in the National Gallery of Victoria
In the National Gallery of Victoria is an anonymous eighteenth-century portrait of a cellist, traditionally identified as the composer Luigi Boccherini (1743–1805). In the early 1990s a portrait thought to be of Boccherini and attributed to Jean-Étienne Liotard (1702–1789) came to light in a private collection in Germany. This is said to have ‘definitively confirmed’ that the National Gallery of Victoria portrait is indeed the composer, but the identification of the Liotard portrait is itself based in part on comparison with the Melbourne portrait. This article re-examines the question of the identity of the sitter in both paintings, confirms the identity as Boccherini, and argues that the Melbourne portrait dates from Boccherini’s early years in Lucca.

Chapter 13: Ted Gott – ‘It is Lovely to be a Gorilla, Sometimes’: The Art and Influence of Emmanuel Fremiet, Gorilla Sculptor
In 1859, the year in which Charles Darwin published his landmark On the Origin of Species By Means of Natural Selection, the French sculptor Emmanuel Fremiet (1824–1910) alarmed the jury of the Paris Salon with a larger than life-size plaster composition, Gorilla Dragging Away a Dead Negress. Fremiet’s sculpture, which was destroyed in 1861, was the first major representation in Western art of the primate that would soon be claimed as ‘man’s brother’ in the evolutionary and religious debates that erupted in the wake of Darwin’s publication. In 1887 a new life-size plaster sculpture by Fremiet, Gorilla Carrying Off a Woman, carried off the Paris Salon’s Medal of Honour. Frémiet received permission from the French State to produce bronze versions in a reduced size, which proved to be highly popular, and it was also reproduced widely by engraving and photography. By these means Frémiet’s sculpture entered the public consciousness as one of the defining images of its time, culminating in the immortal cinematic image of Fay Wray in the arms of the beast Kong in the 1933 film King Kong.