May Mo(u)rn is a site-writing which takes a collection of abandoned black and white photographs of modernist architectural icons found in a derelict arts and crafts house called ‘May Morn’ as a starting point for a discussion of the modernist project and its socialist ideals. Morn and mourn are homonyms, one suggests a beginning, the other an ending. Morning begins the day, while mourning – in grieving the loss of something or someone – marks an ending. Due to their deteriorating material states, the May Morn house and the paper of the photographs point towards their own disintegration – or endings, yet the buildings contained within the photographs are shown at the beginning of their life. What does it mean, now, to turn back and examine these icons of  modernism at an early moment – a spring time – when hope for a better future was not viewed as a naïvely misjudged optimism. This text-image work interweaves images, prose pieces and critical discussions of works by artists such as Elina Brotherus’s Spring (2001) and Rut Blees Luxemburg London: A Modernist Project (1997) to reflect on London’s post war social housing projects as lost utopian dreams and contemporary ideals yet worth striving for, in so doing the work explores the spatial temporality of longing – juxtaposing not only resurgence and decay, but also the siting a fascination with the backwards gaze of nostalgia in relation to anticipation as a yearning forward rather than backward.

For details of other talks in the Architecture+Philosophy series see the website http://architecture.testpattern.com.au/ 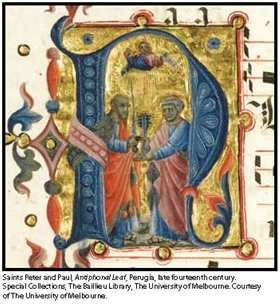 The Art of Praise: Forum and Display on the Medieval Choir Book