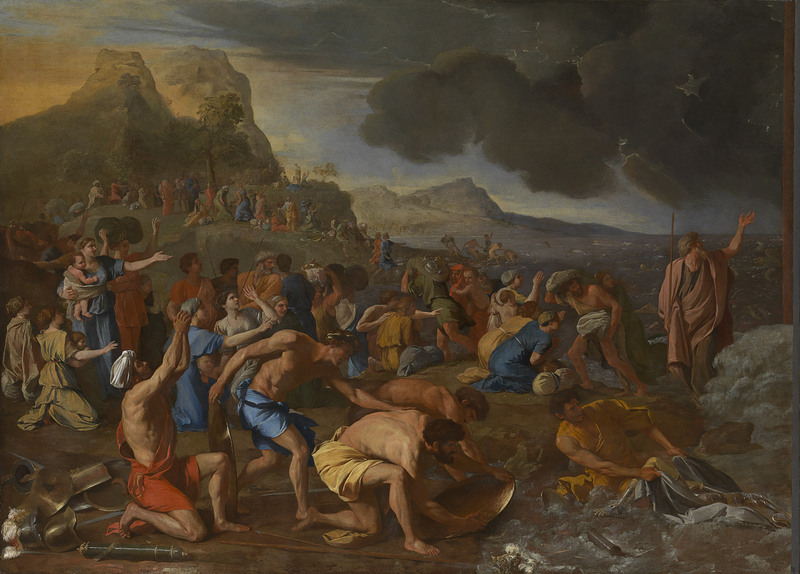 Poussin’s Crossing of the Red Sea was once something of a problem painting. Indeed, its exact relationship to the pendant Adoration of the Golden Calf (National Gallery, London) has made great fodder for undergraduate essay questions. The two works, clearly related in content and—as we shall see—origin have often been seen as quite dissimilar in composition and style, and these differences were once taken to indicate that the two paintings date from slightly different periods in the 1630s. We know from Bellori’s Life of Poussin (1674) that both the Crossing and the Golden Calf were painted for Amedeo dal Pozzo, Marchese del Voghera (1579-1644), and that they hung in his palazzo in Turin. Luigi Scaramuccia in his treatise on Italian painters—Le finezze de’ pennelli italiani, 1672—adds that they were displayed alongside two similar works by Pietro da Cortona, also ‘Histories from the Sacred Texts’. There is no indication in the sources as to exactly when the two works by Poussin were painted, though Bellori implies that they were produced before the painter’s departure for Paris in 1640.

The general consensus had once been to date the paintings to c. 1635-38, although there was considerable difference of opinion, particularly as to which of the two works came first. The issue was most forcefully argued by H. W. van Helsdingen, who contended that the Crossing was an earlier work than the Golden Calf, one in which Poussin had yet to solve convincingly the problem of deploying large figure-groups in an orderly and meaningful fashion. For van Helsdingen, the Golden Calf is an artfully controlled work, in which the variety of poses and gestures conveys the diversity of  action and moods amongst the Israelites but without obscuring the composition as a whole; indeed, the different figural groupings all lead the eye back towards the centre of the painting,  uniting form and content. The Crossing, on the other hand, van Helsdingen sees as a less cohesive composition, in which the figural groups are isolated in separate planes—foreground, middle-ground and background—and thereby prevented from coordinating with each other. As an apparently ‘less successful’ work, then, the Crossing is assigned an earlier date; the two works trace Poussin’s ‘improvement’ as a painter of large-scale compositions. Anthony Blunt, on the other hand, was rather suspicious of such teleology and was content to accept the two paintings as pendant works of the late 1630s, in which Poussin varied his handling of each work to reflect their different subject-matter.

The discovery in 1985 of a 1634 inventory of Amedeo dal Pozzo’s collection, in which both paintings are listed, made all the above rather moot. Further archival research in the 1990s by two Italian scholars, Arabella Cifani and Franco Monetti, revealed that both paintings were commissioned by July 1632. The Marchese had solicited his cousin in Rome, the antiquarian Cassiano dal Pozzo, to obtain ‘different works from the most famous painters’ then active in the Papal City. The two paintings by Poussin were complemented by two further works on subjects from the life of Moses: The Gathering of Manna by Pietro da Cortona and The Construction of the Tabernacle by Giovanni Francesco Romanelli (Scaramuccia mistakenly attributed the latter to Cortona). On July 24 1632 ‘un Pittore Franzese’ (‘a French painter’)—surely Poussin—was paid fifty ducats. Further payment records for all four paintings suggest that they may have been completed by August 1633, and were certainly finished by October 1634.

The Crossing and the Golden Calf are therefore very much a pendant pair, probably produced by Poussin one after the other—if not simultaneously—and intended to be viewed together. Their different formal style is, as Blunt had argued, a reflection of their different subject-matter. Poussin’s aim in his history paintings was to convey as effectively and as economically as possible the events, actions and emotions of a narrative sequence within the confines of a static, two-dimensional image. As with so many of Poussin’s works, the source for the content of the Crossing is a text, specifically the Old Testament Book of Exodus (14. 19-31) with some additional details taken from the Antiquities (II, 16. 2-6) by the first-century historian Flavius Josephus. The title of the painting—‘The Crossing of the Red Sea’—is something of a misnomer, as the Israelites are already safely ashore. Nonetheless, the stream of figures exiting the water and hurrying up the beach indicates that their salvation has only just occurred. To the right of the canvas, white surf still crashes angrily against the shore and in both foreground and background the dark sea broils with Egyptian dead, horses and men alike: ‘The horse and his rider hath been thrown into the sea’ (Exodus, 15. 1). In the immediate foreground, five sinewy men drag bodies from the water, divesting them of their arms and armour, a detail from Josephus and a mark of God’s providence in supplying the refugee Israelites with weapons for their defence. In the middle-ground,  a man steps from the waves and looks back towards the sea, his wife huddling against his back while he wearily drops his few belongings with the rest of his family, who wait kneeling on the shore. Ahead of them a line of figures scrambles up the beach, some half-turned to look back upon the deluge they have escaped. At the far left, the figures are stationary and face towards the sea, their arms raised in wonder and in praise at the miracle they have just witnessed.

Poussin’s deployment of figures here is carefully controlled, as is his use of gesture and colour. The figure of Moses, at mid right, is the pivot for the whole composition, linking foreground, middle-ground and background. The five men in the front stretch out from the sea at Moses’ feet, their chain of limbs drawing the eye across the canvas to rest with the man in red, down on one knee, his arms raised in praise to God. His gesture of thanks is mirrored by the women behind him in the middle plane, their arms leading the eye back down the sequence of Israelites along the shore to Moses. The family-cluster beside the prophet, and the fleeing figure with the bundle of goods balanced on his head next draw us up into the background, a further rank of Israelites emerging from the sea and hurrying up a rocky, sun-lit escarpment. Whereas in the Golden Calf Poussin uses a circular- or figure-eight-like composition, here he employs a complex zig-zag that snakes back on itself, the leftward momentum of flight tempered by the rightward gestures of amazement and thanksgiving. The three planes are all linked one to another, to the extent that the profile forms of three foreground figures—the man in the yellow loincloth, crouching to pick up a shield; the bending figure in blue behind him who stretches forward to grasp his shoulder; and the man in red with his hand raised in prayer—are mirrored by three tiny figures in the background, likewise looting the spoils from the Egyptian dead. Far from being ambivalent and inconsistent (to paraphrase van Helsdingen), Poussin’s rhythmic gathering of forms and gestures is at its most complex, a complexity that allows the painter to draw out different elements of the narrative and the different emotional responses of the protagonists. Poussin chose not to depict directly the more vivid moments of the story, the parting of the Red Sea or the drowning of the Egyptians, showing instead the response of the Israelites to these dramatic events. He asks us to consider the human aspect of this miraculous tale. The tonal transition from darkness to light, now so much more visible in Carl Villis’ sensitive restoration, echoes the Israelites’ physical journey from captivity to freedom and their emotional journey from fear to wonder, relief and gratitude. A refugee people, fleeing persecution and tyranny, risk a dangerous crossing at sea, and arrive miraculously ashore, exhausted and with what few belongings they still possess. Poussin’s beautiful and penetrating exploration of this theme finds a fitting home in twenty-first-century Australia.

Roberto Ferretti, ‘A preparatory drawing for one of the dal Pozzo paintings of scenes from the life of Moses’, Burlington Magazine, 127, September 1985, pp. 617-19. 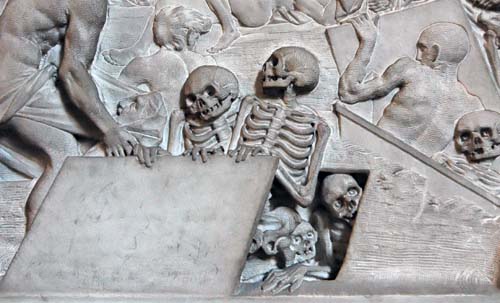 What are you looking at? | David R. Marshall – Bernini’s Raimondi Chapel in S. Pietro in Montorio, Rome 1638–48 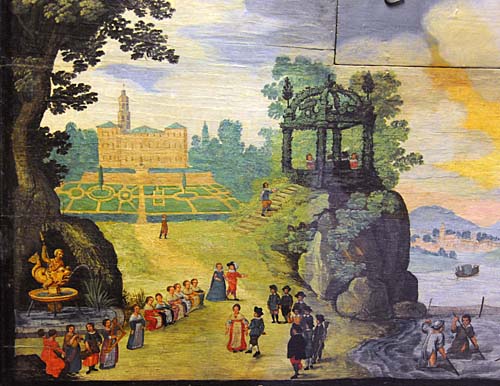 David R. Marshall – A Carracciesque Landscape at the Powerhouse 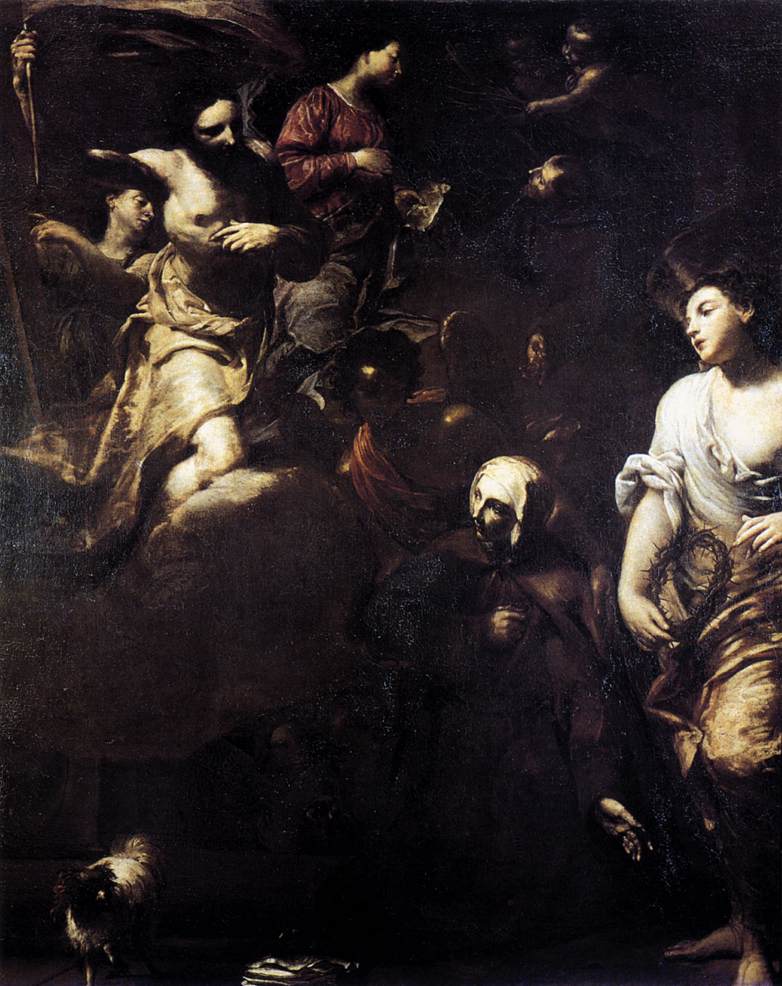 4 thoughts on “What are you looking at? | Mark Shepheard – Nicolas Poussin, The Crossing of the Red Sea”