Cure for pain, eX de Medici, is now on display at the Australian War Memorial

One of the most significant artwork donations in the Memorial’s history, Cure for pain, by renowned Australian artist eX de Medici, is now on display at the Australian War Memorial.

Donated by Erika Krebs-Woodward through the Australian Government’s Cultural Gifts Program, Cure for pain is a detailed, multi-layered work that reflects the themes of mortality and equality in death throughout a century of Australian military history. At more than four metres long the painting is also the largest work produced by de Medici, who was appointed official war artist to the Solomon Islands in 2009 and is one of Australia’s most celebrated contemporary artists.

Director of the Australian War Memorial Dr Brendan Nelson said the donation added to the Memorial’s world-class art collection, and that the work is an important tool in our evolving understanding of the Australian experience of war.

The donation of Cure for pain is an example of the Australian Government’s support for the Australian War Memorial to develop its art collection through the Cultural Gifts Program. I offer my sincere thanks to Erika Krebs-Woodward for this generous donation. eX de Medici has crafted an image that tells a history of the development of military heraldry over a century of Australian involvement in international conflict. To have this intricate piece as part of the national collection enables visitors to create new connections to Australia’s military history. – Dr Brendan Nelson

The work’s title is drawn from the opium poppy – the source for morphine – which has historically been used to provide pain relief on the battlefield. Its contemporary relevance relates to the conflict in Afghanistan, a country renowned for its opium crop and narcotics production. Skulls are a traditional symbol of death in European art; de Medici has translated this into helmets worn by troops from the colonial period through to contemporary conflicts. Interested in how military hardware is adapted, Cure for pain also demonstrates the evolution of helmet design, from the spiked German Pickelhaube to modern combat helmets. They provide protection, but de Medici sees how they are also for “the disguise of identity in aggressive situations.”  The work is richly illustrated with flowers as symbols of remembrance, including the Flanders poppy, often used in commemorative events and by visitors to the Memorial.

Cure for pain is on display in the Mezzanine Gallery of Anzac Hall as part of the Memorial’s exhibition ‘The deceiving eye’. 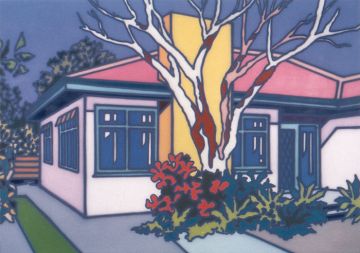 News | A New Museum of Contemporary Art for Melbourne University