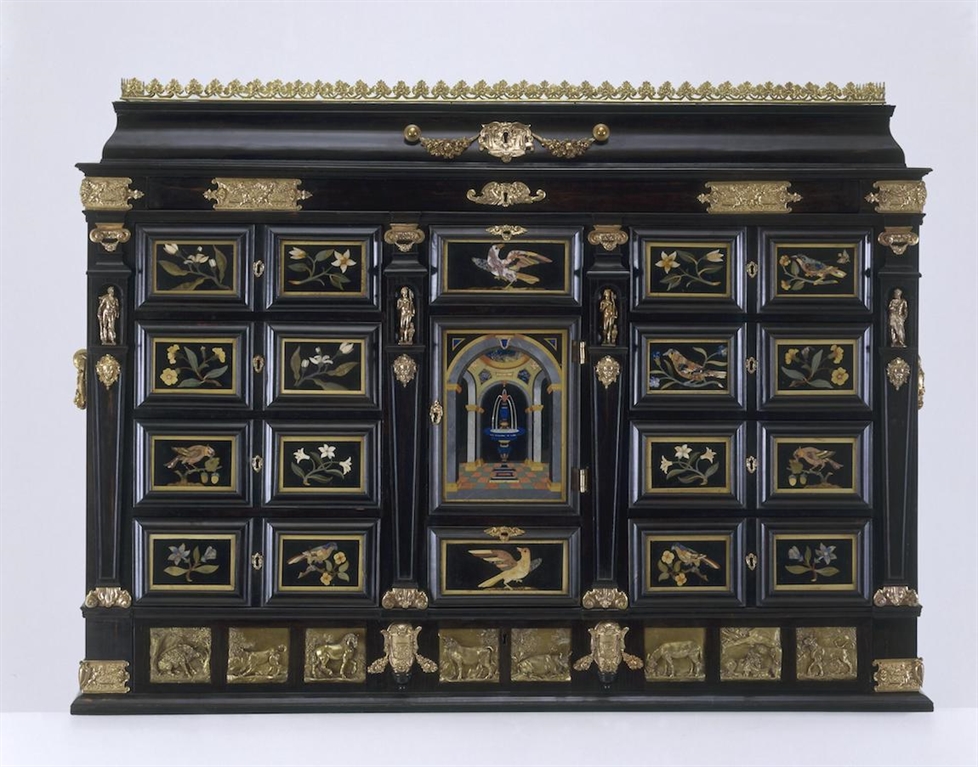 This seminar, presented by Professor Martha Pollak, explores cabinets like those once owned by the diarist, ecologist, and wannabe urbanist John Evelyn in the context of the secretive inclinations of the mid-seventeenth century, and with the search for meaning in objects and nature. When the Victoria and Albert Museum recently reopened its early modern galleries of decorative arts, among the large objects stood John Evelyn’s imposing cabinet made of pietre dure and ebony (W24-1977). Its inclusion in the “European” rather than English galleries signified the position of the much-quoted diarist, ecologist, and wannabe urbanist as an influential traveller to the continent.

This sizeable and costly piece of show furniture was not, however, the only such item that Evelyn had brought back in his clobber from the continent. A much more modest museum in London, the Geffrye (styled as the Museum of the Home) houses another of his cabinets (46-1979). Also imposing, but veneered in carved black ebony rather than colourful semi-precious stone, this cabinet survived among his descendants’ possession—unloved, and indeed secreting a trove of papers so uncared for that they were negligently used to make tailor’s dress patterns. Folded among the cabinets numerous and hidden drawers, the trove of papers eventually turned out to be—to a knowledgeable visitor—parts of Evelyn’s vast correspondence and most of his now-famed diaries.

Martha Pollak is Professor of Architectural History at the University of Illinois at Chicago.

Her work focuses on issues of urbanisation and on early modern architecture; among her recent books is ‘Cities at War in Early Modern Europe’ (Cambridge, 2010). She has served as book review editor for the ‘Journal of the Society of Architectural Historians’ and as Visiting Professor at the Courtauld Institute of Art and at the Technion in Haifa. She is a contributor to the ‘Giornale dell’architettura’, where she writes about contemporary architecture, museum exhibitions, and urban design.